“Designated areas of the event space at La Marina offer a bottle fee, which Parks did not approve.”

The License Agreement for the Dyckman Marina Concession is not very specific on public access, possibly because a scenario where access would be restricted was so outlandish that it would never be an issue.  After all, anyone can stroll the grounds of the Boat Basin Cafe or similar waterfront restaurant concessions at all times during operating hours.  And so the language is limited to general descriptions such as:

The Dyckman Pier and natural beach/boat launch are always open; these are located outside of the fenced concession area and maintained by the concession.  But within the entirety of the improved restaurant and marina areas, access is a different story and very different than what was promised in the original renderings.

Every night, the concession operates a “bottle-service” setup on part of the patio, where patrons must buy bottles of liquor or champagne costing hundreds of dollars in order to sit down.  That seems to be contrary to the definition of the “general public“.  Parks has acknowledged that this fee is not allowed; one  email dated December 20, 2012 from a Parks representative to a nearby resident stated: “Designated areas of the event space at La Marina offer a bottle fee, which Parks did not approve.”

Despite this admission, bottle service has continued every night since the concession opened.  Parks has simply not enforced their own rules.  Besides the bottle service, there are other access issues.  There is security starting in the early evening that involves ID checks and pat-downs and metal detector wands, all to enter parkland.  As noted elsewhere, the SLA has been something of an enabler in breaking several clauses of the license agreement, and access is no exception.  Their approval of standing bars (prohibited in the License Agreement) required the concessionaire to put ID checks and security at the main entry, since technically the entire grounds and not just the restaurant became serving areas.  The SLA Application mentioned starting ID checks at the front gate 10 pm, but in the wake of the recent shooting the police have advised starting ID checks much earlier in the evening. 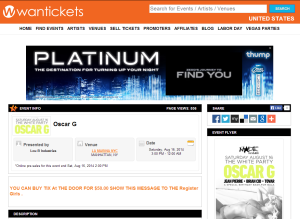 Example of a ticket website that sells tickets for concerts at the concession. On the date of the concert patrons are advised “tix are $50 at the door”. (Wantickets.com)

Then there is the question of ticketing for concerts (which are technically prohibited but somehow still happen).  Thirty to forty times a summer there are ticketed concert events that require paid admission to a portion or all of the grounds.  These tickets are sold through small promoters or through ticket websites (in the case of MyTicketPremium.com, the ticket website is actually owned by one of the concession operators, earning further revenue).  Prices often are printed as “$0.00” on the tickets, to allow prices to vary based on demand.  $25 to over $100 is typical for most private parties and concerts.  The License Agreement did allow for the possibility of private uses, but not without a long and formal notice:

Ticket-holders wait to gain access to the beach area for a concert sponsored by Heineken on Aug 30th, 2014 (Flickr)

Beyond the tickets, there are also occasional cover charges just to enter the premises.  According to one August 10, 2014 Yelp review:

“I made reservations for a late lunch (3pm) with no trouble. When we arrived at the restaurant my wife was turned away at the door because she did not bring photo ID(keep in mind she is 34 and we were here to eat), the security told us that there is a special event on and there was a cover charge of $20 at the door!! None of the above was mentioned at the time of making the reservation. When we called to ask to speak to manager about this the reservation manager suggested we find an ATM!?!?! After being displeased with the answer she tried to find the GM to see if they could assist further. We stayed on hold for awhile but grew too frustrated and decided to not give this place our business. We will not be returning.”

And so the question becomes whether Parks specifically approved each and every one of these large private-access events, or even the more modest ones such as political events or business conferences.  The answer, it turns out, is “most of them”, tickets and all.  However, this raises further questions:

How is all of this “creating a more equitable Parks system?

These park gates are regularly locked all day on weekdays and before 11 am on weekends. (NYDN)

The very hours of the concession as operated also limit access.  The License Agreement does not specify opening hours, only closing hours.  In practice, the facility opens to the public at 4 pm on weekdays and 12 pm on weekends (although private events earlier in the day are not uncommon).  Although the early plans all included a cafe/snackbar, Parks never required a lunch service and has seemingly approved denying access to the grounds until liquor and food service begins.  This seems to be contrary to the spirit if not the letter of the License Agreement, and poses a question as to how the docks and proposed EcoDock are to be accessed on, say, a pleasant weekday afternoon or bright Sunday morning.  At a time when public access to civic spaces is under threat, this makes for very poor policy.

The concession must be restored to its original intent of a restaurant/cafe and marina, with broader operating hours similar to the Boat Basin Cafe and unimpeded grounds access during those hours.

Security guards protect the entrance to the VIP area.

September 7, 2014. A woman scans a ticket for a DJ event while several employees man a cash register. The $ 60 dollars to enter the beach area Erick Morillo

Privacy screening cuts off view from Manhattan Greenway in order to encourage people to buy tickets if they want to see the music acts. Photographed Oct 6, 2014

Waiting at the main gates.

Barriers stacked and ready to be deployed for concerts to control access to the site. (Google)

Takeover of the new park path for use as a ticketholder line, June 25 2016

Another example of a private off-season event.

Example of a private party during the off-season (Nov-April), when the facility is completely closed to the public yet open for private events.