“To improve the beauty of the city’s public outdoor spaces, and ensure an even healthier and cleaner experience for New Yorkers, smoking is prohibited within New York City’s parks, beaches and pedestrian plazas.”

New York City has very healthy city parks.  Smoking is banned throughout the city on any parkland.  Even e-cigarettes are banned!   Don’t even try to sell cigarettes from a vending machine at a city park.  And so, as with all Parks concessions,  the License Agreement is very clear on also prohibiting the sale tobacco products of any kind:

Under no circumstances may the Licensee sell or cause to be sold on or about the Licensed Premises cigarettes, cigars or other tobacco products.

Hookahs rent for $30 at the concession and are extremely popular. (Instagram)

However, since opening, a tremendous amount of smoking has taken place on the site, every single night, primarily of hookah.  In four summer months in 2014 alone, the concession collected $160,317 in hookah revenue.  The question is why Parks is allowing this.

First, let’s examine the national picture.  Because it is exempt from many smoking bans, hookah has been increasing in popularity nationwide.  Surprisingly, 17% of all teens have tried hookah, and 22% of all people 19 to 30 yrs old living in very large cities.   And so cities across the US are increasingly trying to warn people about its risks.   But in New York it is also extremely profitable as a smoking ban loophole, making it hard for restaurants and bars to resist.  (At the Dyckman Marina concession, hookah costs $30 with $15 refills).  Even the headline performers at La Marina like to be seen smoking it.

Much fuss was made about the Dyckman Marina concession serving hookah, until it was clarified that the contents were herbal and not tobacco-based; it was further claimed that the concession had received “special permission” from Parks to have herbal hookah on the premises. 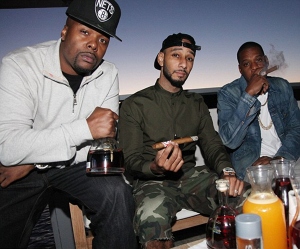 Jay-Z enjoys some cigars at the concession VIP area.   Allowing one kind of smoking makes it difficult to enforce bans on other smoking activities.(SoleCollector.com)

But should that really have been the end of the story?  If Parks was seeking to promote “healthier and cleaner” parkland, why did they grant permission for an activity that is not at all healthy and contains carcinogens?  Many cities are now banning herbal hookah in addition to tobacco hookah, because the charcoal used to heat the shisha mix is still dangerous even without the tobacco content.  According to a Canadian article:

In a study published in Tobacco Control in September, researchers in Alberta found that smoke from herbal hookah contained levels of toxic substances equal to or in excess of cigarette smoke. Ferrence performed a similar study published in Tobacco Control in September that examined the air quality of 12 hookah bars in Toronto — where only herbal hookah was allowed. The air contained much higher levels of cancer-causing particulate matter and carbon monoxide than those found in smoking rooms of bars.

Another recent study found increased levels of benzene in hookah smokers, a chemical that previous research has linked to cancer.

The researchers found that urine levels of a compound called S-phenylmercapturic acid (SPMA), which forms when benzene is broken down in the body, increased more than fourfold in the hookah smokers who smoked at a hookah lounge, and increased almost twofold in the people who smoked hookah tobacco at home.  Moreover, levels of SPMA in the urine of people who were at a hookah lounge but hadn’t smoked were 2.6 times higher after they were exposed to the hookah smoke in lounges.

Benzene is present in both hookah tobacco smoke and the emissions from the burning charcoal in a hookah that is used to heat the tobacco, [study author] Kassem said.  “In addition to inhaling toxicants and carcinogens found in the hookah tobacco smoke, hookah smokers and nonsmokers who socialize with hookah smokers also inhale large quantities of charcoal combustion-generated toxic and carcinogenic emissions,” she told Live Science.

A recent court case about a hookah ban in Vancouver that included banning herbal shisha was upheld partly on the grounds that:

The city argued that hookah smoking poses a significant health risk, and Yee agreed, giving particular weight to the testimony of two doctors who outlined the health concerns for both consumers and those who inhale second-hand smoke.

“These health risks include respiratory problems and acute cardiovascular events such as heart attacks, as well as cancer,” Yee wrote, noting that Dr. Milan Khara of the Vancouver Coastal Health Authority’s tobacco control program described the smoke produced by a hookah as a “toxicant soup.”

Smoking in City Parks was banned in 2011, but the rules don’t seem to apply in Inwood.  Photo taken September 7, 2014

Some New York officials have looked into herbal hookah bans, so far without success.  The latest proposed bill against hookah,targeting restaurants and bars that are not primarily smoking lounges, even comes from the Council Member whose district includes La Marina.  But why is Parks waiting for legislation instead of taking the lead on such a prominent health matter?  Turning city parkland into an enormous hookah bar is unhealthy, bad policy and encourages the unauthorized nightlife uses at the site.

Allowing one kind of smoking  combined with nightlife uses also makes the existing ban on other kinds of smoking such as tobacco and marijuna hard to enforce.  Tobacco smoking was in fact prevalent enough that by late 2014 the concession physically created a smoking section, despite the outright ban on smoking in parks!  During a late-season visit on September 12, 2014 the smell of marijuana was noticeable in the forecourt at 9 pm, and signs indicating “designated smoking area” for a roped-off section were observed.  Even New York Magazine lists La Marina as having a “smoking section” in their profile.  This is completely illegal, and yet Parks took no action.

Hookah, and all other smoking activity, has no place at a waterfront park site that should be focused on providing canapes and canoes, not charcoal and cancer.  The restoration of the concession should include only the approved uses of a Restaurant and Marina, with full respect for both the the letter and the intent of the License Agreement’s smoking ban.

A selfie of smoking hookah (DNAInfo/Instagram)