“Our beach bar will be open serving ice cold beers, champagne and frozen cocktails (including non-alcoholic for the little ones)” 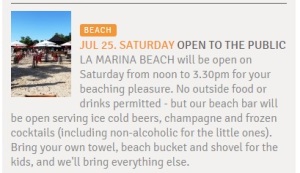 After three years of complete and total disregard for the RFP process, the approved site plans, and the binding concession contract that they themselves wrote, it appears that the lumbering machinery of the Parks Department may finally be waking up.  For lo and behold, for the first time the entire concession site will be open to the public, not just the restaurant half of it.   Not every day at all operating hours as it should be, but it is indeed a small-grained victory to see the sandy “beach” portion of the site now be open to all for a couple hours on Saturday afternoons from May 23 to September 12.What is this “beach”, and why does this matter?  Going back to the prior concessionaire, the south end of the site was primarily boat storage.   As part of their submission during the RFP process, the Manhattan River Group (MRG) cleverly proposed to not in fact use this area for marina operations, as other applicants had suggested, but to simply drop the idea of on-site boat storage entirely, thereby freeing up the waterfront land for better uses.  The better uses they proposed?  A cafe to be called “315”, supplementing the enclosed restaurant on the north end of the site.

For 315, MRG will convert he southern portion of the upland (the narrow strip south of the Quonset hut) to a full-service dining area; complete with stand-alone food preparation facilities, a wine and beer bar and bocce ball courts.  MRG will create a unique dining experience literally inches from the Hudson River and increase available seating by almost 20%.  Set off from the rest of the facility, 315 will be available for private events.  This area will provide stunning waterfront views of the Palisades and George Washington Bridge.

Note that 315 would be “available” for private events, not “closed at all times unless you attend a ticketed concert“.  In any case the idea was a good one.  Here is more from the RFP on the underlying rationale:

This notable expansion of seating along the waterfront recognizes the value premium placed on open space at the expense of low-margin, environmentally stressful industrial uses.  Not only will the public have greater access to the river under the MRG plan, but the additional seating will generate additional revenue through rental for private and corporate events, as well as increased food and beverage sales when not under private contract.

To make up for the loss of upland waterfront maintenance and repair facilities, MRG has made arrangements with Monte’s Marine Service at the Englewood Boat Basin, which lies directly across the river from the Dyckman property, to handle all of MRG’s watercraft servicing needs.  By outsourcing repairs and maintenance, in exchange for a royalty payment, to an existing facility, MRG is able to provide human access to a stretch of reclaimed waterfront; in its current use the upland is neither safe nor accessible.

Parks must have liked this concept, as MRG won the concessions for both the restaurant and marina under their combined proposal.  The site plans that were submitted and approved by the Public Design Commission included an area much as it was described in the RFP and renderings:

Site plan as approved for the south end of the concession

However, a few years later when the concession actually opened there was no 315 Cafe or waterfront seating to be found.  Instead, the name of the main restaurant had changed from Costera to La Marina (the proposed name suggested in a rejected proposal backed by Fernando Mateo, who had bought into Manhattan River Group after they won the concession).  The 315 building was still there with its restrooms and service window, but only as a bar.  The entire southern area was now a sand “beach” filled not with outdoor seating and diners but with a massive stage, dozens of powerful speakers and patrons attending concerts and late-night DJ’s.  Furthermore, the “beach” area was being treated as an event venue that was only accessible during parties or Sunday exercise classes and otherwise barricaded to the public.

Aerial view from Google Maps and closeup of barriers that typically block off entire south end of site from public access.

Parks did absolutely nothing for three years to stop this about-turn from what was clearly intended in the proposal and approved in the site plans.  Besides the problematic issues of ticket revenue, the capacity of the area, and the fact that concerts were strictly prohibited, the beach hosted 30 to 40 DJ parties, live concerts, alcohol product launches and other promoter-driven events, significantly increasing the associated problems with the community with regard to traffic, parking and noise.

Meanwhile, the natural beach north of the site, next to the pier, has also been allowed to deteriorate.  This area was specifically included in the marina concession agreement (see page 28) to be the responsibility of the operator to clean and maintain free of litter, debris, etc. as a public benefit in exchange for operating the concession.  Hmmn, let’s see what that beach looks like under La Marina management:

The natural beach, aka small-craft launch, just north of La Marina.  The La Marina operators are contractually obligated to clean this beach area as a public benefit.  They ignore this part of the agreement just like many other part.  (Photo taken Aug 9, 2017)

And so, with the natural beach in ruins and the artificial beach turned into a concert venue, how to enforce the intent of the RFP?  In 2015 a new policy appeared to open the artificial beach part of the site to the public from noon to 3:30 pm on summer Saturdays.  (Originally the beach was to open from 2 pm to sunset, but this conflicted too much with the illegal nightclub and concert operations and so was reduced to noon to 3:30 pm).  This in effect makes the area something like the urban beaches / beach bars in Berlin, Paris and other European cities, or closer to home, the Governors Club on Governors Island.  The text on the LaMarinaNYC.com website reads:

LA MARINA BEACH will be open on Saturday from noon to 3.30pm for your beaching pleasure. No outside food or drinks permitted – but our beach bar will be open serving ice cold beers, champagne and frozen cocktails (including non-alcoholic for the little ones). Bring your own towel, beach bucket and shovel for the kids, and we’ll bring everything else. 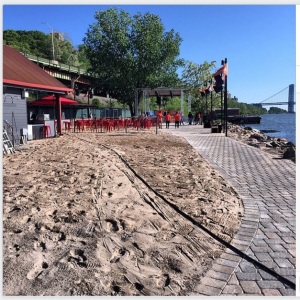 So even though La Marina’s site is public parkland, you cannot bring your own food or drink to enjoy there.  And never mind apple juice or chocolate milk or water for the kids as a normal waterfront cafe might offer — they’ll have plenty of Virgin Bloody Marys or Virgin Margaritas frozen cocktails for the wee ones instead. (Yes, you read that correctly.)

And what exactly prompted this change in behavior of the Parks Dept and their concession after three summers of exclusive private use?  Could it have been the February 4, 2015 letter from Manhattan Borough President Gale Brewer to the Parks Department calling for more waterfront access?  Did Parks finally remember what Dyckman Marina was supposed to be in the first place?

Regardless of the reason, the Coalition for Dyckman Marina welcomes this change and looks forward to more like it.  Such as holding movie nights on the beach instead of prohibited concerts, or being open from 7:30 am to midnight like Pier I Cafe in Riverside Park, or when the beach does close to private events it’s because it was rented out for a wedding and not to a club promoter.

2017 Update: The beach days that ended at 3 pm were lightly attended (no surprise) and did not return at all in 2016.  Perhaps under pressure from Parks to restore some token public access, a beach day returned in 2017 that for the first time did not include a concert afterward — so the hours extended to 8 pm.  Well, that only took six years.

It was noticeable that on Beach Day, because there was no concert, there was no significant traffic anywhere in the area.  A day later, when a concert took place, the traffic returned.

This is a start, but only a start.  After all, why isn’t every day Beach Day?  Why isn’t the natural beach kept clean?  Restore all of the Dyckman Marina concession to its intended uses so that the full value of this parkland can be realized for the city and the community.